You are here: Home1 / Key Board of Director Terms and Definitions

Key Definitions for Board of Directors, and Executive Management

Board Terminology that every Member, Board Chair, and CEO/Executive Director Must Know

The rules of the state in which you incorporate determine when the directors must be named and how many directors are required. Typically, the business of the corporation “shall be managed by a board of at least three directors.” However, the average size of nonprofit boards ranges from 11 to 15 directors; while US publicly-traded firms range from eight to eleven directors.

What is a Board of Directors?

A board of directors is the governing body of an organization (called the board ) of an incorporated firm. The board is a group of elected individuals (its members, also known as directors) acting as fiduciaries on behalf of the organization, its shareholders, and other interested stakeholders. The role of the board is to ensure the purpose, mission, vision, and core values are defined. The board of directors set broad goals and approves annual strategies. The board ensures the company has adequate, well-managed resources at its disposal to support the CEO, and executive team allowing them time and space to act responsibly.

Board members meet periodically to discuss and vote on the affairs of the organization. At a minimum, state laws require an annual meeting with all board members present.

The board has the ultimate decision-making authority and, in general, is empowered to: 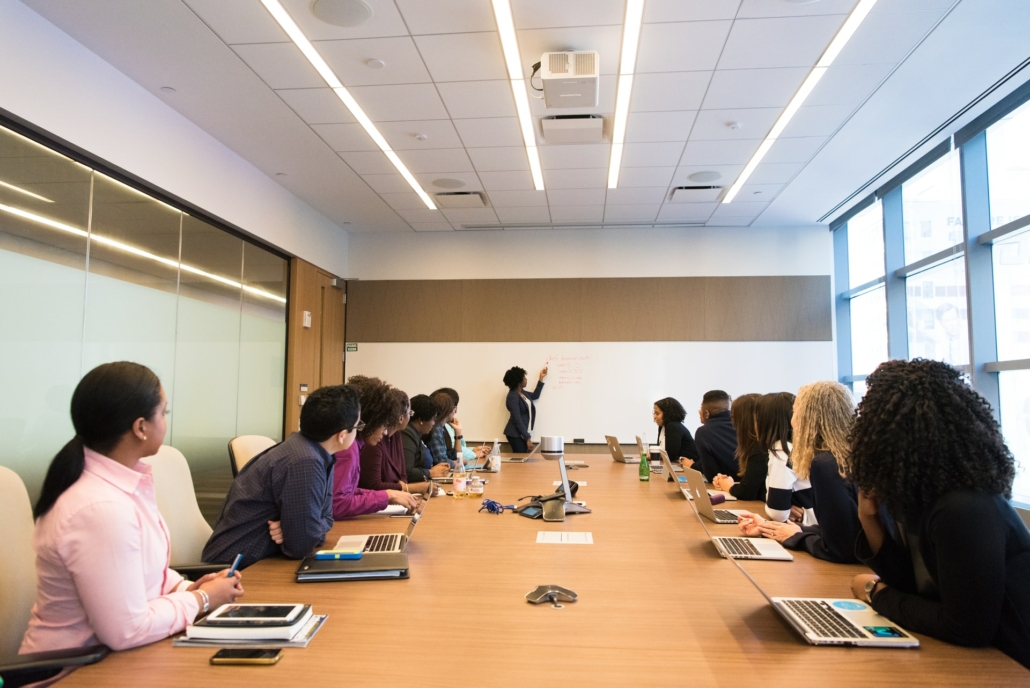 What is a Board of Trustees? A Board of Trustees is a board of directors of a non-profit organization (NPO) such as a charity, trust, or university. Members of the board are appointed (not elected) to set the policies of the organization, and they appoint and terminate senior management personnel. Under the doctrine of collective responsibility, the entire board is liable for the financial and other consequences of the organization’s activities.

Articles of Incorporation or Organization: This document defines the purpose of the organization and contains a basic framework for governance. It is a legal document that must be drafted with the assistance of an attorney to ensure compliance with all applicable state laws.

What is an Audit? An audit is a process of an organizational financial system review that assures that proper policies are in place to segregate financial duties, protect cash receipts, require second signatures on large checks, keep track of inventory, assure efficient bidding, produce timely reports and maintain accurate record keeping.

Board Director’s Agenda Builder, which is offered in the Board Portal, can help you quickly build your meeting agenda, add security to private pages, a linkable outline, and much more. Plus, full annotations are available to your board members and staff.

What is a Quorum? A quorum is the minimum number of voting members who must be present at a properly called meeting in order to conduct business in the name of the group.

The primary requirements for a board quorum are found in state law and can be further modified by an organization’s controlling documents such as bylaws or articles of incorporation. For example, the basic definition under California corporate law for a board quorum is a simple majority of board members. Although an organization’s bylaws can specify a smaller number of members for a quorum, the law sets the minimum number at one-third of the authorized number of members or two members, whichever is greater. The only exception to this requirement is a corporation with only one member who is the sole authorized board member.

What is Call to Order? When a meeting is called to order it formally signals the start of a board or committee meeting.

What is a Board Portal? A board portal is a secure website and/or mobile app that enables the executive management team and their staff to privately and securely communicate with the organization’s governing body (its board of directors or trustees) in a single platform. The board management software helps improve governance for stronger organizations. Organizations can align, collaborate, and work seamlessly together as a fully functioning boardroom within the board portal.

In the portal, organizations can create a central location and a permanent digital record for all  board documents. Members, staff, and legal teams can access audits, financials, committee reports, agendas, minutes, meeting information, and also vote, sign legal documents, and much more.

The ability to have private and secure discussions between members of your board of directors, staff, and guests will also foster better communication, and keep your organization secure and compliant.

Find more information about Board Director’s Board Portal here.

What is a Board Chair? The board chairman (also chairperson, chairwoman or chair) is the highest officer of an organized group such as a board, a committee, or a deliberative assembly. The person holding the office is typically elected or appointed by the members of the group. The chair presides over meetings of the assembled group and conducts its business in an orderly fashion. When the group is not in session, the officer’s duties often include acting as its head, its representative to the outside world and its spokesperson.

What is a Lead Director? A lead director offers an alternative to splitting the combined chairman-CEO role. The lead director serves as an independent chief among all board members and thereby helps ensure board relations run smoothly. But since the introduction of the new position to corporate America, there’s been little consensus regarding the responsibilities of a lead director. A recent survey sheds light on lead directors, having found that they excel in improving board performance, in strengthening relationships with the CEO, and in providing leadership in crisis.

Lead directors drive high-performance boards. Many lead directors improve board performance by facilitating board discussions, by helping directors reach consensus, and by keeping board matters on track. In fact, all of the lead directors surveyed said they had the authority to call executive sessions and to preside over them. They may also help deal with difficult or underperforming directors as well—a task that has traditionally fallen to the chairman or CEO.

What is an Independent Director? Independent Directors are defined as directors who, among other things, are not part of management and who do not otherwise have a role or relationship with the corporation that has a potential of creating any conflict of interest.

What is a Board Secretary? The secretary of the board of directors has overall responsibility to create and maintain corporate records and other important corporation documents. Included in this responsibility: (1) Record minutes of all board meetings and minutes of all committees as needed. (2) Minutes must be taken in a specific form and all board and committee actions must be recorded. (3) Keep records of all policies approved by the board. (4) Maintain a calendar of events, including the date of the annual meeting and budget approval dates. (5) Maintain personnel and payroll records for executive employees reporting directly to the board of directors. (6) Keep all records in a safe place and make sure all documents are in good order in case of audits.

“The beautiful thing about learning is nobody can take it away from you.” ~ B. B. King

What is Fiduciary Duty? A fiduciary duty is the highest standard of care. The person who has a fiduciary duty is called the fiduciary, and the person to whom he owes the duty, is typically referred to as the principal or the beneficiary. If an individual breaches the fiduciary duties, he or she would need to account for the ill-gotten profit. His or her beneficiaries are entitled to damages, even if they suffered no harm.

Fiduciary duties exist to encourage specialization and induce people to enter into a fiduciary relationship. By imposing these duties, the law reduces the risk of abuse of a beneficiary by the fiduciary. As a result, potential beneficiaries can have greater confidence in seeking out a fiduciary.

What is Duty of Good Prudence? Duty of Prudence requires a trustee to administer a trust with a degree of care, skill, and caution that a prudent trustee would exercise.

Board Statements and Legalities

What is Business Judgment Rule? The Business Judgment Rule is a legal principle that makes officers, directors, managers, and other agents of a corporation immune from liability to the corporation for loss incurred in corporate transactions that are within their authority and power to make when sufficient evidence demonstrates that the transactions were made in Good Faith.

The directors and officers of a corporation are responsible for managing and directing the business and affairs of the corporation. They often face difficult questions concerning whether to acquire other businesses, sell assets, expand into other areas of business, or issue stocks and dividends. They may also face potential hostile takeovers by other businesses. To help directors and officers meet these challenges without fear of liability, courts have given substantial deference to the decisions the directors and officers must make. Under the business judgment rule, the officers and directors of a corporation are immune from liability to the corporation for losses incurred in corporate transactions within their authority, so long as the transactions are made in good faith and with reasonable skill and prudence.

What is a Determination Letter? Also known as the “IRS letter establishing nonprofit status,” the determination letter is sent by the Internal Revenue Service to document that it has awarded an organization tax-exempt status. It is the most important legal document a tax-exempt organization possesses.

What is a Form 990? The Internal Revenue Service Form 990 is an informational tax form that most tax-exempt organizations must file annually providing an overview of the organization’s activities, governance, and detailed financial information.

Form 990 also includes a section for the organization to outline its accomplishments in the previous year to justify maintaining its tax-exempt status. In collecting this information, the IRS wants to ensure that organizations continue to qualify for tax exemption after the status is granted.

What is Mission Statement? A mission statement is used by a company to explain, in simple and concise terms, its purpose(s) for being. The statement is generally short, either a single sentence or a short paragraph.

These statements serve a dual purpose by helping employees remain focused on the tasks at hand, as well as encouraging them to find innovative ways of moving toward an increasingly productive achievement of company goals.

What is Vision Statement? A vision statement describes what a company desires to achieve in the long-run, generally in a timeframe of five to 10 years, or sometimes longer. It depicts a vision of what the company will look like in the future and sets a defined direction for the planning and execution of corporate-level strategies.

Board Director’s Agenda Builder allows admins to upload conflicts of interest to any meeting or board packet, and is a way for the board to be notified on record that a conflict of interest was disclosed.

GET OUR FREE 27 KEY DEFINITIONS FOR DIRECTORS AND MANAGERS 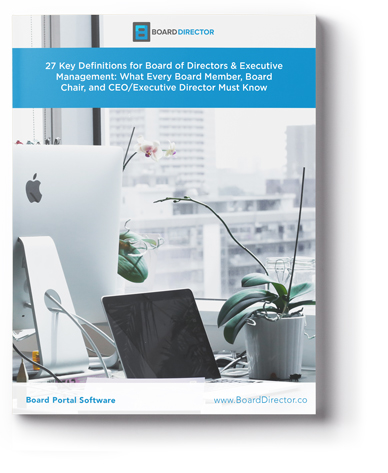